skip to main | skip to sidebar

Where am I now?

I can't believe it's been nearly a year since I blogged on this page! Where am I now?

Well, I started an officially hosted page at www.nataliesgetfithavefun.com.

Why? I was kind of getting to a point over here where I was out of things to say. My kids are getting to a point where they don't necessarily appreciate me writing about them so much anymore (and it's much easier to embarrass them almost instantly on Facebook anyway!).

I also wanted to go in a new direction. I love writing about all things health, fitness, nutrition and weight loss related.

So that's where I am! Come see me over there!
Posted by Natalie at 9:03 AM No comments:

Because It's Not About the Bike 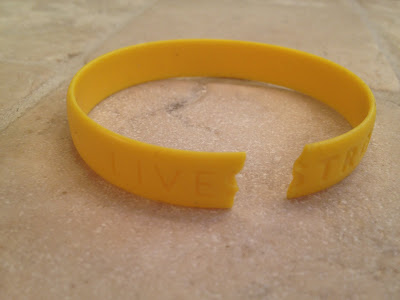 In August 2004, about four months into Finn's 3 1/2 years of chemo for Acute Lymphocytic Leukemia, my sister, Tara, came to Ohio. With her she had a bunch of yellow wristbands. LIVESTRONG bracelets. Yellow. Rubber. $1 a pop. Everyone had one. It was like the cool thing to wear.

For awhile. Quite awhile in fact.

I put one on. It was huge and fell right off my arm.

No worries. The child-sized ones fit, and Tara had a bunch of those, too.

So from that day on in 2004, I wore a LIVESTRONG wristband every day. Every second of every day. I wore it when I slept. I wore it when I showered (probably a good thing). It left my arm exactly two times: once in August 2008 when I was getting a manicure at one of those in-the-mall nail salons and the nail girl pulled it off before I knew what was happening, and once in June 2012 when I was at a friend's ranch and we were practicing roping. The wristband got caught and came off.

So twice in eight years did that wristband ever come off my arm. Pretty amazing. And possibly unhygenic.

And then a weird thing happened. In August 2012, Lance Armstrong, he of the 7 Tour de France titles, cancer survivor, founder of LIVESTRONG, said he would no longer fight the doping charges that had plagued him for years.

The next day, my 8-year-old LIVESTRONG bracelet broke and fell off my arm. Just dropped to the floor that morning when I was drying my hair.

Was this a sign? Was it time to stop wearing the wristband? Information was flying around on the Internet, of course. People, especially bike riders, were mad. Rightfully so.

People who donated to LIVESTRONG were mad. WTF was that all about? Since when did donating to cancer become a bad idea? Give me a break.

People vowed to stop wearing their wristbands because they were symbols of shame, cheating, lies, blah blah blah. I even read about a lawsuit where a couple who donated to LIVESTRONG were going to sue to get their money back. Morons.

So while I thought the timing of my wristband breaking was interesting, I didn't hesitate. I went straight to the drawer where we still had a little stash. There was still a child-size wristband waiting there for me. I have it on. And I will continue to wear it.

Because the yellow LIVESTRONG wristband isn't about Lance Armstrong. It's about awareness of a horrible disease that's one of the leading causes of death among children (and many adults, for that matter).

After all of this time, the yellow wristband is pretty much a part of my arm. But several times a day, it will get pushed up too far and I'll feel it. It will get caught in my shirt and I'll feel it. I'll look down and see it. And still, after 8+ years, I remember why I wear it. Because my kid, along with way too many others, had cancer. And that little yellow wristband -- regardless of who created it -- put cancer awareness on the minds of a lot of people who might not have thought about it otherwise. And until a lot more people are thinking about it and donating for a cure, we won't get one.

I'm grateful for the yellow wristband, no matter who brought it to the world.
Posted by Natalie at 10:54 PM 4 comments:

Why It Never Pays to be a Jackass, Parts I & II

Last week (and probably into this week), I'm pretty sure I was suffering from PMS. Just some quick background for you so you have a frame of reference for my mood.

Some additional background: I was kind of excited about my birthday this year (Thursday, Dec. 6) because I realized for the first time in memory, there was no hockey practice -- we were all going to be at home to maybe actually do something on my birthday! In addition, the neighborhood Christmas tree lighting was on the same night as my birthday. We could go watch the tree lighting at 6pm and then go out to dinner. Fun!

Anyway, on Wednesday evening, Nov. 28, after working at ski school all day, I was going through e-mail and trying to get caught up on regular work when I opened a message from the school saying that Dec. 4 - 6 would be Christmas concerts at school each evening -- two grade levels performing each night. Finn's night was Dec. 6. at 6pm.

I was outraged. A Christmas concert (requiring props and costumes, no less) with one week's notice, on my birthday, and during the tree lighting. WTF?

I replied to the message in haste (NEVER a good idea) pointing out: one week's notice, during the tree lighting, and didn't they know it was my birthday and I wanted to go out to dinner (OK, I skipped the birthday part, but I thought it).

The next morning I went over to school and the office manager, who is a friend, said they'd been receiving a lot of e-mails like mine. I was there to volunteer in the library, and over the course of shelving books, someone said something about the tree lighting being on Tuesday, Dec. 4.

Uhhhhh, what? Total ding dong. I had misread the info about the tree lighting. It didn't actually conflict with the 4th grade concert OR my birthday.

I went to the office and ate some crow. They laughed. But did point out that there was still a conflict for the Kinders and 1st graders' concert and the tree lighting.

Oh well, so sorry for the little ones, but now I could go to the tree lighting on Tuesday and out to dinner for my birthday.

Except that I realized I had to go to Denver for a work meeting on Tuesday and wouldn't be back until about 8:30pm -- the tree lighting was at 6pm.

I told my friend who worked in the office. She laughed.

So that left us with going to the Christmas concert on Thursday evening and out to dinner for my birthday.

Until the music teacher apparently contracted the plague Tuesday morning and ALL of the concerts were cancelled.

Eamonn had never coordinated going out to dinner because he thought we were going to the concert. In the end, I stayed home and ate popcorn for my birthday dinner.

I hope the Kinders and 1st graders enjoyed the tree lighting!
Posted by Natalie at 12:15 PM 2 comments:

Natalie
My hair and I grew up in Worthington, Ohio. It's flat there. And humid. Very, very humid. In 2006 we moved to Colorado. It's hilly here. Mountainous even. And dry. Very, very dry. Stay tuned for more adventures with me and my hair.